The Great American Cleanup, hosted by Keep Florence Beautiful will be held on April 17, 2021. KFB celebrates it’s 30th anniversary in 2021, so this will be a special event for our community! .Mark your calendars and prepare your teams!

Click Here to register for the event, and learn more about Keep America Beautiful.

Latest from the Blog

Thanks to everyone that came out to support Keep Florence Beautiful during our inaugural event on September 19, 2020. We appreciate your support and we can’t wait to see you again next year!  ** Special thanks to all of our Sponsors & Partners for this event including River Rats, Willcox, Buyck & Williams, P.A., Three Wren, […]

London Durden, one of our ‘little’ helpers watering the new garden at Timrod Park this evening… 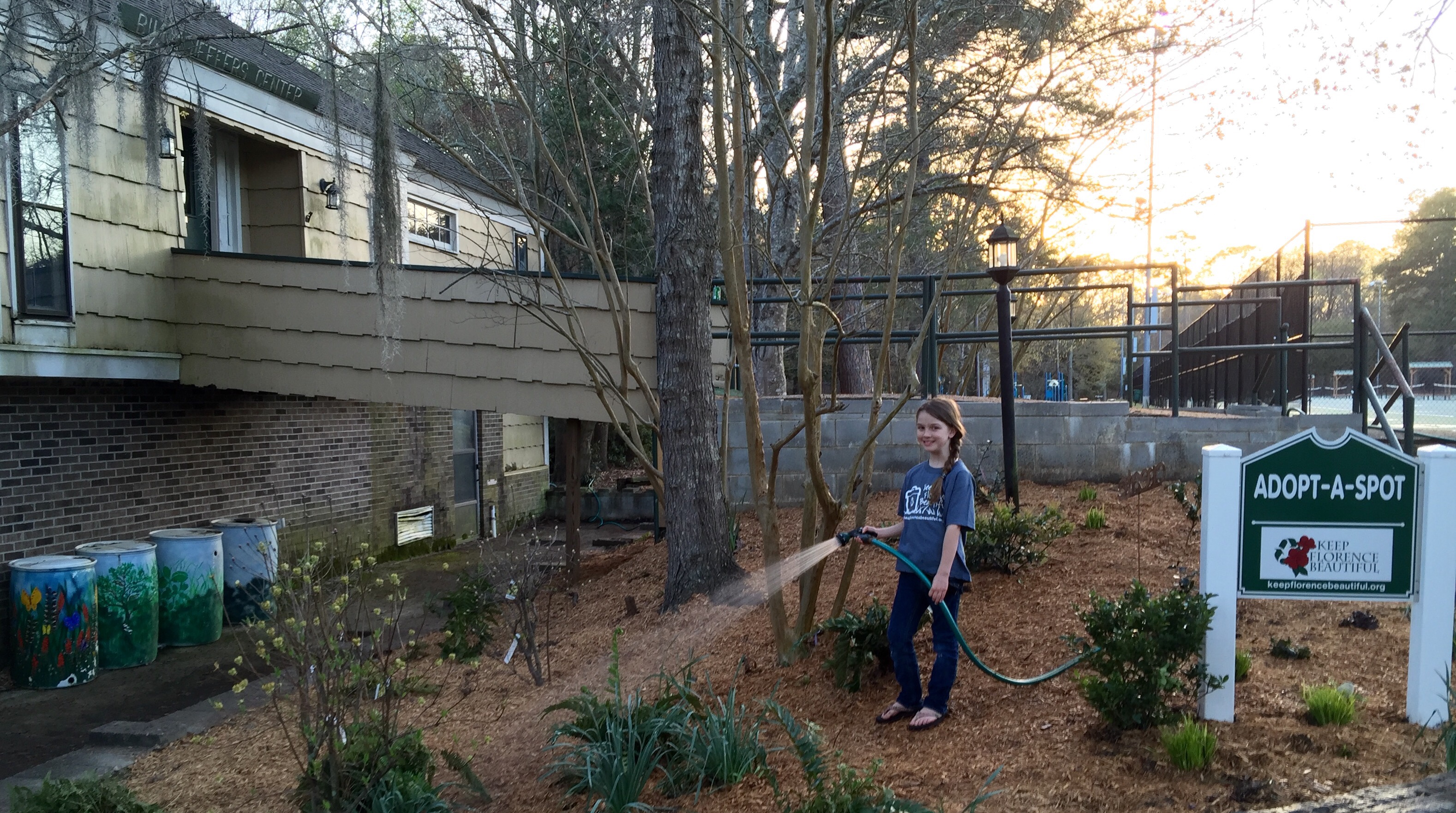 FLORENCE, S.C. – Spring is in bloom and soon green foliage will hide most of the county’s litter problem that the bareness of winter annually reveals. But while some litter will be out of sight, it won’t be out of mind. Leaders say Florence County is plagued by litter problems and now the Florence County Council is cleaning up its code to increase punishments and coordinate more cleanup efforts.

The following text is an excerpt, the full article which can be found on the FLORENCE MORNING NEWS website at http://www.scnow.com or by clicking on the image above.

County residents have few options when it comes to trash disposal. Contract with a trash collection service, take it to one of 15 drop-off sites or burn it. Some opt to illegally dump their refuse on back country roads where no one will catch them but many will see the results for months afterward. Mumford said countywide collection could be possible in the future, but that’s still unknown. For Herbie Christmas, an environmental services officer with the county, litter is a problem that residents need to get proactive about and one he’s been fighting for 29 years. In fact, litter fines have remained the same, at $200, since the start of his career. “Our county, we definitely have problems without a doubt,” Christmas said. “But all these things we’ve been doing for years has definitely helped tremendously if you comparatively look at other counties.”

The proposed county ordinance, which has strong committee support, has fines that mirror state maximums. First- and second-time misdemeanor offenders convicted of littering less than 15 pounds would be hit with a $200 fine or 30 days in prison. Third-time and subsequent offenders would be fined $500 with the same possible jail time. The court must also impose eight hours of litter gathering for first offenders, 16 hours for second offenders and 24 hours for third offenders. Any offender who exceeded 15 pounds of litter could be hit with fines no less than $200, but only up to $500 or imprisoned for up to 90 days and up to 100 hours of community service. Additional hours ordered by the court could be adjusted to a fine of $5 an hour sentenced. Furthermore, if a person’s name was found on the litter recovered by authorities the county could win a conviction on that evidence alone. It’s good news for Christmas, but still just a small part. “Picking it up is not the answer; writing tickets is not the answer,” Christmas said. “It’s about educating people.”

Michelle Bailey, chairwoman of Keep Florence Beautiful, couldn’t attend the Thursday meeting, but is encouraged by council actions to become more active in the cause her group has spearheaded for years. “I think the county coming on board with litter control will help definitely,” Bailey said. “People are busy and really rely on the city and county to keep the community clean, but what they don’t understand is that we need to be more vested and play more of a part.”

“I really hope it opens up new partnerships with Keep Florence Beautiful,” Bailey said. We have adopt a spot, adopt a street program within the city and we’re looking to grow that in the county. We have the Great American Cleanup and are in the school systems and even paying for some of the recycling initiatives going on, like at Wilson High School.”

The county will be pursuing grants through Palmetto Pride that Florence County Sheriff Kenney Boone said will increase awareness and education efforts. Bailey welcomes the additional educational outreach opportunities as well.  The proposed ordinance could be introduced at the April County Council meeting and could be in place by June. Read more, including the full text of this article online at SCNOW.com

Keep Florence Beautiful is a 501C3 organization based in Florence, South Carolina.  Our mission is to engage individuals to take greater responsibility for improving their community. We support Litter Prevention, Waste Reduction, Recycling, Beautification, and Community Greening and work to identify and reduce litter by organizing cleanups and programs that beautify and naturally clean our environment.  These programs include community education for responsible consumerism; source reduction, reuse and recycling; community gardens; restoration of vacant lots; highway and shoreline beautification; urban forests, native and wildflower plantings; and graffiti prevention and abatement. Thank you for visiting our website, please feel free to  Contact Us for more information or if you would like to get involved!  Read more

Stay in touch with Question Pro

Our members, volunteers, and donors are the fuel that power this organization. We can use free survey templates to constantly keep in touch with them, understand their expectations and work towards their satisfaction with this simple yet robust tool.

How to Recycle in Florence